I am very pleased to write that as of a few days ago I became the featured guitar tutor on the website http://www.guitarlessonslondon.com/  for the next few months and rotating with some other excellent tutors.

This means that anyone searching using the phrase 'Guitar Lessons London' will find a homepage on Google page one for that phrase which talks about me and describes my teaching. Nice one! Check it out!
Posted by Hungry4Guitar at 04:04 No comments:

Creating Guitar Parts ( where there are'nt any ) Continued

In the last post I began describing a situation where I have to learn a song and play a version of it when the mp3 I have been sent or YouTube video I have been directed to has no guitar part. I admit that each time that happens part of me says ' oh no..more work to do!' But likewise another part of me says 'great! I can do what I want and have fun with this'. In the case of the last example I gave my reaction was definitely more the latter.

The song was ' I Should've Known Better' sung by Mica Paris written with and featuring Omar. I had to learn it for this performance on BBC2's Javone Prince Show last month -

Immediately one of the things that sticks out for me in a song like this is the great groove and fantastic, melodic bassline.

Often the first thing I think to do when there is such a great bassline is simply to copy it and play it along with the bass player, maybe an octave higher ( the next register up in pitch ). Mainly because I know I'll enjoy playing the line but also because it is a common trick for reinforcing something that is a strong part of the music and creates a sort counter melody to the main vocal ( and what a vocal! But more about that later ).

In this case the bass player ( the excellent Colin McNeish ) played the line on a bass synth to emulate the sound and feel of the original track. It still seemed to work doubling it on guitar and I decided to help it stand out a little more by using a Wah pedal. Guitar and electric bass guitar playing featured lines in unison or octaves have been a staple of popular music since the days of rock n' roll in the fifties, all through to Jimi Hendrix and classic rock from the sixties and seventies to present day rock, pop and R n'B.. you name it. This is for good reason because it features a bassline in a natural sounding way ( guitar and bass guitar being musical cousins ) while not crowding the music too much or 'getting in the way'.

So for the BBC2 performance I began like that for the intro and first ( or intro ) chorus. 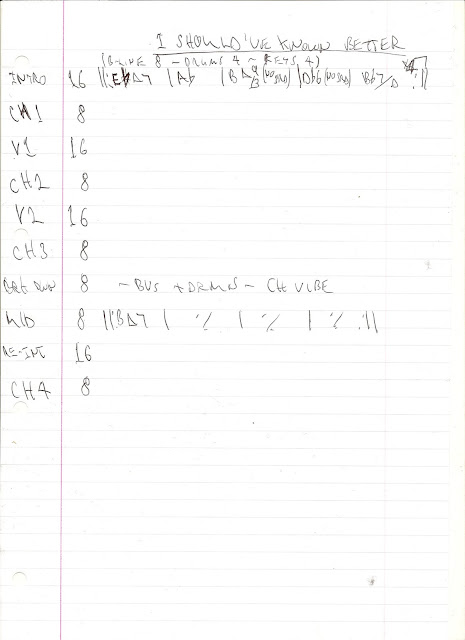 Here you can see the sections of the song and their bar lengths on the left of the page. I doubled the bass for the 16 bars of intro at the top of the song and also the 8 bar intro chorus ( CH1).

The song is built around an 4 bar chord sequence that repeats throughout most sections of the song apart from the middle eight. I find it useful to learn all chord sequences for any tune I am to play even if the guitar is not necessarily required to play chords. It helps to get into the structure of the music and follow the harmony if required.

I decided next to sit out completely for the first half of the first verse ( V1 ) along with the keyboards. In a lot of arrangements instruments will come in and out in pairs. It helps to create impact as one section moves into another. Here it has the impact of chords being absent from the first half and then being stated by both keys and guitar in the second. I play clipped, percussive, staccato versions of the chords to contrast with Lex Cameron on keys playing more sustained chords on a string-like sound.

After the second chorus, as a shortened version of the arrangement written, we go straight to the middle 8 where I again double the bassline and then instead of a re-introduction to choruses out to end the song.

So, with such great, hooky basslines it's an easy decision to double them on choruses and other areas where it might make sense ( such as the middle ) and otherwise to follow the chords on the second half of verses. Quite a simple example of creating a part for guitar when there is'nt one on the studio recording of a song.
Posted by Hungry4Guitar at 14:25 No comments:

I have recently been involved with work where I have been required to create guitar parts for performances of songs where the original pieces of music ( or versions which I have been sent ) contain no guitar parts. This leaves me having to create parts for myself. This is not an unpleasant task and can, in fact, provide an opportunity to get creative and 'do your own thing'.

Here is a recent example. A performance with Mica Paris on The Javone Prince Show ( shown this month on BBC2).

Hungry4Guitar
Hi, I am Hawi Gondwe a guitar player and tutor based in London,UK. I am a lover of all things musical and am a musician of nearly thirty years experience. I am also an experienced music educator who likes to discuss the workings of the creative process.